After a very relaxed, first week of the Easter holidays, we headed off for a week away at the historic and very picturesque town of Ludlow in Shropshire with my parents 😀 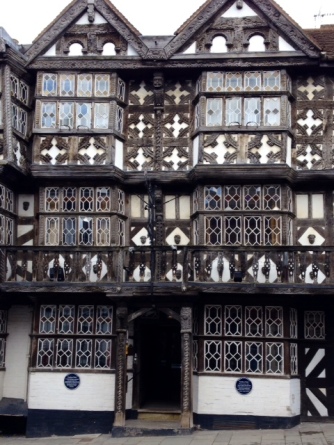 And where better to stay than in the castle itself? This was the view that greeted us on Monday. Fab! The kids had a great time running around exploring. On Tuesday we explored more of the town itself.  Above right is one of the many, many beautiful, old, Tudor buildings: The Feathers Inn. If you love history and haven’t visited before, I thoroughly recommend it as a destination. 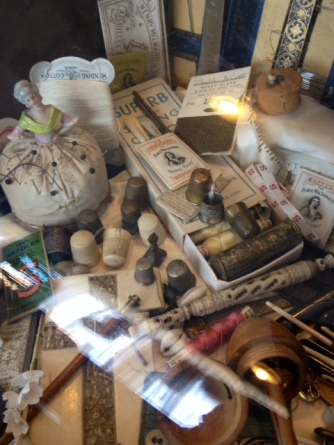 On Wednesday we followed a couple of popular, walking trails around the town taking in yet more beautiful views. By Thursday we were ready to explore a little further afield and so headed to Blist’s Hill, a Victorian, model village (one of the many Ironbridge, tourist destinations). Above right was one of the lovely displays in the draper’s shop. 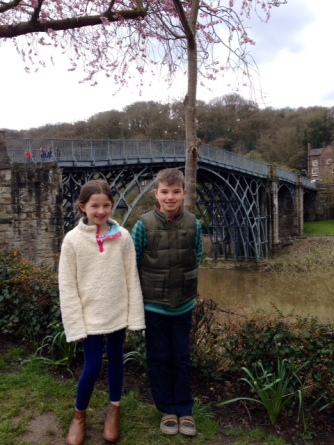 Friday took us shopping… amongst the fantastic array of independent shops (many of them food-related, Ludlow is a foodie’s heaven) was The Bindery Shop. I treated myself to a beautiful, new address book. Sadly it was time to head home at the end of the week, but we made the most of the journey home pausing at Ironbridge itself (above right).

And today, Sunday, I’m making the most of the last day of the holidays back home. This is the next project on my sewing table 🙂 Dreaming of warmer weather…

Hope everyone’s had a lovely break too (and possibly still going if you’re lucky, school holidays seem to be all over the place at the moment). I’m looking forward to catching up on the, no doubt many, posts I’ve missed while I’ve been away…

For more details on how to join in with #sundaysevens head over to Nat’s site Threads and Bobbins.

Seems like some time since I last joined in with one of these. This holiday couldn’t have come soon enough though! Teaching just seems like one very long endurance test the older I get! Coupled with the endles cycle of running the monkeys here, there and everywhere I was plain exhausted. We’ve been enjoying some serious downtime this week, with a view to being more alive in the next one… 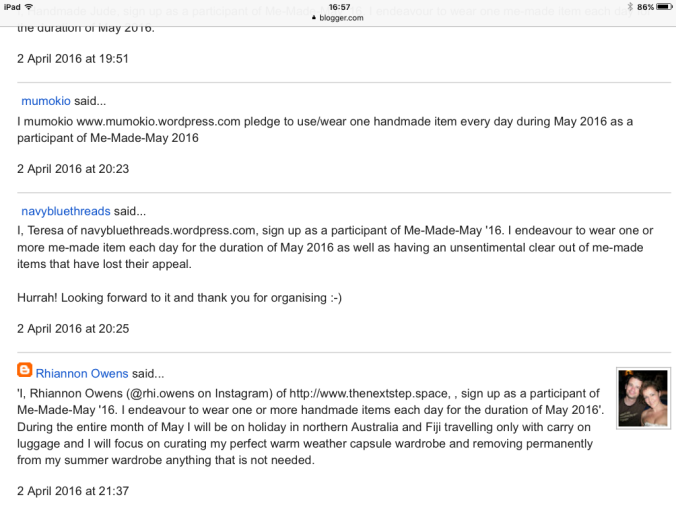 This week’s bonus image had to be the launch of this year’s MeMadeMay. I’m going for the same challenge as last year (but am seriously hoping the weekends are a lot easier this year…), but with additional pledge of continuing my decluttering. Sure I’m not the only one who finds getting rid of MeMades even harder than RTW.. 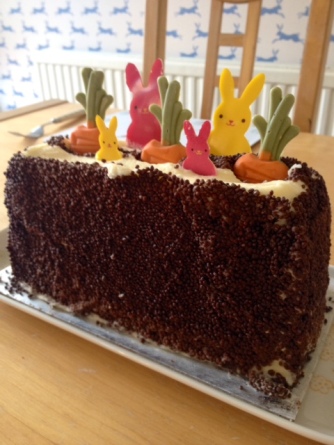 This year Easter coincided with my daughter’s birthday: this was my favourite of the three cakes we ended up with 😉 On Easter Monday we just about managed to dodge the rain, walking around the Walls in Chester.

On Tuesday I managed to sneak in a little sewing time, adding a lining to my first jacket. Inbetween runing errand on Wednesday we nipped into one if my favourite charity shops for books. My son especially did well 🙂

My work wardrobe was looking a whole lot better on Thurday after a thorough cleaning and unpacking of some much- needed Spring clothing. On Friday my daughter was feeling very pleased with herself for completing this sewing kit she’d been working on for a couple of weeks.

And we ended the week with a cycle ride, well the kids on theirs at any rate (and us lagging behind on foot).Hope everyone else has enjoyed a lovely Easter break.

For more details on #sundaysevens head over to Nat’s site ThreadsandBobbins.com

It’s been a strange half-term for me as I was out of synch with my own children: both lovely and annoying at the same time! I was determined to get rid of the still-lingering -from-Christmas and flu-enhanced podge making a fair few items in my wardrobe a little bit too snug around the waist… With the monkeys out of the way (in the nicest possible sense of course), I was also determined to get a fair few sorting jobs done too. Decluttering seems to be a constant in our household at the moment. And of course I wanted to do some nice things too: so catching up with friends and some quality time in the sewing room beckoned. 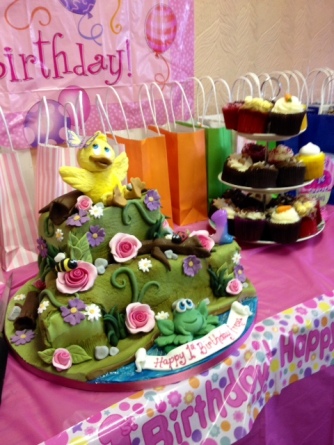 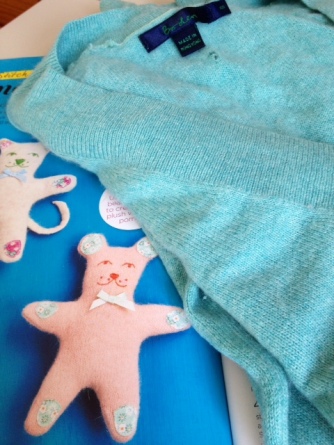 Sunday was one of our busiest days in a while and required military-style pick-up and drop-offs for both son and daughter. Inbetween the frenetic activities and taxi-ing back and too, I managed a flying visit to an old colleague’s joint 40th and her daughter’s 1st birthday party, where it was a real treat to catch up with friends from my previous school. The image above is her daughter’s lovely cake 🙂 On the sewing front, I put an old jumper to use making some plushies for my daughter.

Exercise: It was a Sunday! 😉 Does hoovering count?

On Monday I made a concerted effort to tidy and declutter the most annoying ‘dumping’ spot in our house: our sports cupboard which houses both mine and my husband’s exercise clothing, waterproofs, weekend bags, the ever-expanding ironing pile, Winter coats…… And pretty much anything else that doesn’t have a particular home. Four charity bags later order was restored 🙂 I can’t tell you how much simple joy opening this cupboard now gives me: sad but true… I also cleaned and tidied the kitchen, again!

Catching up: coffee with friend from school who also works part-time, but in a different department, consequently we rarely get chance during term time.

Sewing: made a start on a dress for daughter

Exercise: walked monkeys up to school and back, Rocket yoga class at gym 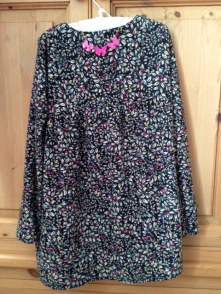 Tuesday was Shrove Tuesday, or Pancake day. Above was our attempt at some vaguely healthy toppings. On the sewing front, despite a daft cutting out error, I finished the Playtime Tunic for my daughter out of some of my leftovers which is always satisfying.

Catching Up: coffee with another old friend and former colleague

Exercise: walking monkeys up to school and back 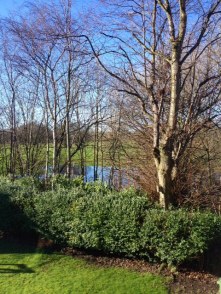 Wednesday was a bit of a staying snug in the sewing room day: my favourite 🙂 Here’s my #sewingselfie. Gazing out of the window I noticed a temporary lake popping up in the small copse just beyond our garden from the recent deluge. As a reward for all my cleaning and tidying, especially that dumping cupboard, I treated myself to some very pretty and fragrant flocks.

Catching Up: met up with some other mums at the bake and take after school

Exercise: walking monkeys up and down to school and Jivamukti yoga class at gym 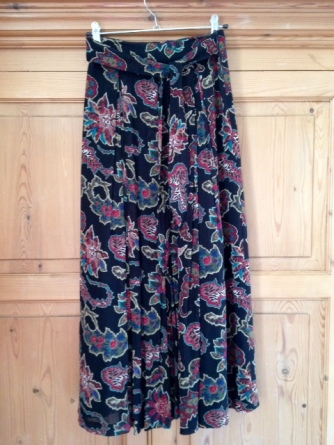 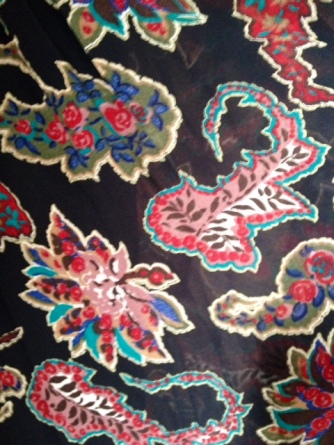 On Thursday I spent a pretty frustrating morning attempting to convert this vintage skirt into something more wearable. I’m still not convinced it’s going to work, but at least I tried…

Sorting: popped to IKEA for some storage stuff and rearranged socks and underwear drawers, kitchen, again…

Exercise: walking monkeys up and down to school, Hot yoga class at gym 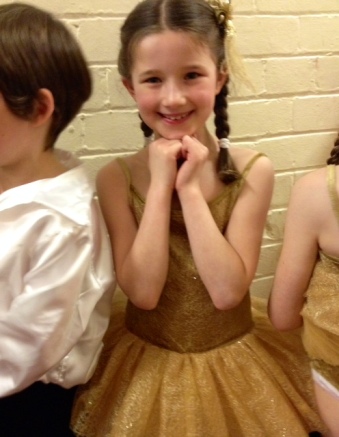 On Friday I volunteered to help out at my daughter’s biannual dance show, where she was performing in both ballet and tap routines, as well as singing. She had a fair few costume changes, but this gold tutu was my favourite. There were lots of other Mums I knew also helping out, so although exhausting keeping them entertained between dances and hunting down missing parts of costumes, it was pretty sociable too.

Exercise: I think I can count running up and down backstage at the above, walking monkeys up and down to school

Sewing: no actual sewing, but did tidy up as we had relatives coming to stay. And of course the kitchen… 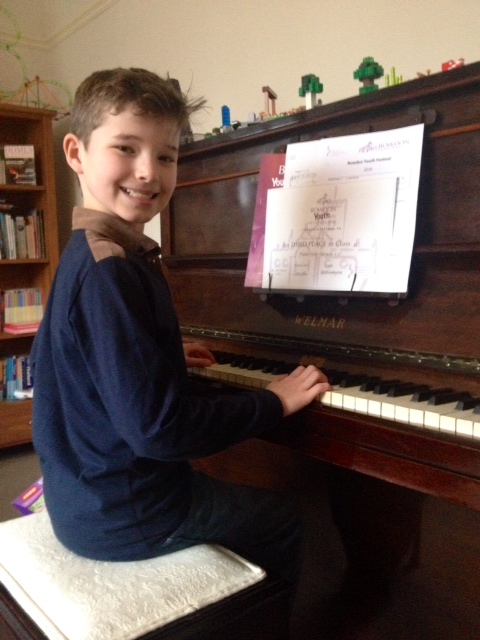 And finally Saturday was totally consumed by the above show too. I volunteered to help out for the matinee performance and in the evening, along with both sets of grandparents, daddy and brother we all got to enjoy watching her. Above photo is of my son rehearsing his piano piece for a local musical festival. This was actually last week, but don’t like to celebrate one child without the other. We were delighted when he won third place in his category 🙂

To join in with #sundaysevens head over to Nat’s site at Threadsandbobbins. 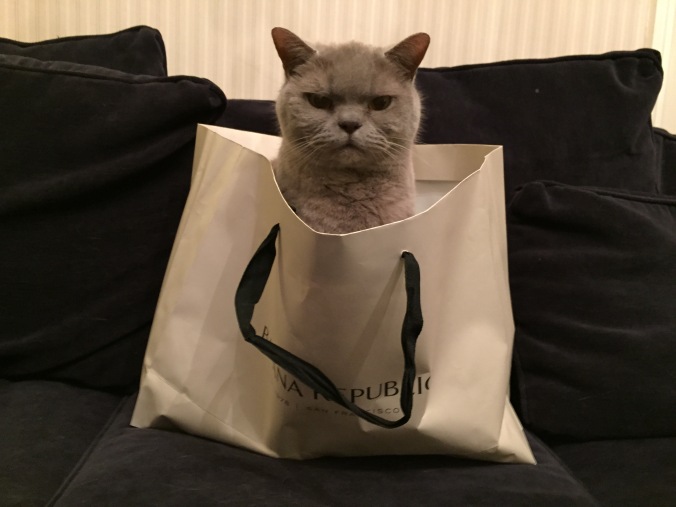 And a final, bonus photo especially for Del, just because 😊