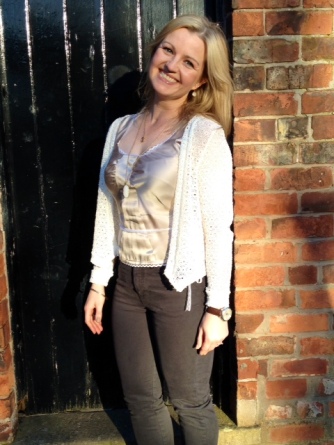 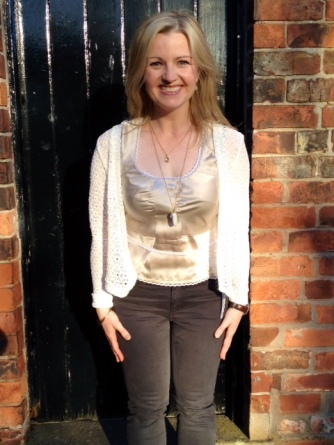 So here’s my April Seamworks pattern: the Wembley I’ve made it up using the lovely material I was gifted in this year’s Secret Sewing Santa organised by Sheila over at Sewchet. It’s a kind of lace knit, something I’ve never attempted before, in a very pale cream. I thought making it up in a more ‘casual’ design would mean I’d get a lot more wear out of it. Thank you Kate, it’s very me, you guessed perfectly 🙂

The Wembley  is a cropped cardigan which was very quick and easy to make on my overlocker. It didn’t quite take an hour, but I could see how future versions almost could, so near enough. I think this is a really versatile design, like their Oslo, and I can see me running up several more of these very soon. But can you spot the obvious mistake I made though? 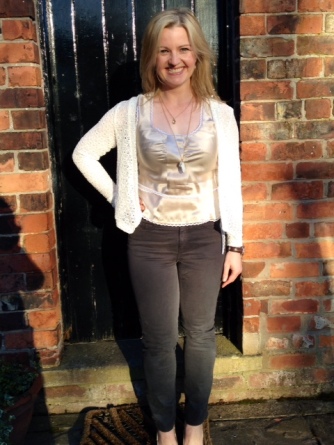 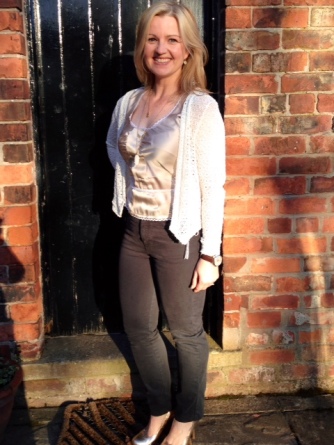 To be honest I’m amazed this hasn’t happened more often. And I’m hoping it’s not too easy to spot… Yes, those front edges are supposed to be pointed. Mmmm, whilst I was attaching the neckband I hacked off a corner with the blade and once it’s gone, there isn’t really any turning back. Thankfully I figured it might just work as a ‘design feature’, I’ve heard hacked off corners are in 😉 So, I simply hacked off the matching corner, and I think I’ve just about got away with it, don’t you?

I wore this out for a rare date night with husband last night and I loved it. It’s the perfect mixture of comfy, yet dressy with just enough ‘pretty’. Love it and just in time for #MeMadeMay.

Size: Small (toyed with a medium, but glad I stuck with this)

Adjustments: unintentional corner features… Enough said. This is pretty short, even on me. While it worked well with my high-waisted jeans in the photos above I might add an extra inch or so in length next time

Time Guide: 1 hr, this took me roughly an hour and a half (after cutting out), so pretty accurate

I finally made a jacket and can you tell how pleased I am with it? After much deliberation, (and thank you for all your suggestions), I finally plumped for the Simple Sew ‘Jackie O’ pattern. This wasn’t originally in my list, but I knew I had it somewhere (probably a sure sign that I need yet another clear up in my sewing space), and eventually unearthed it. 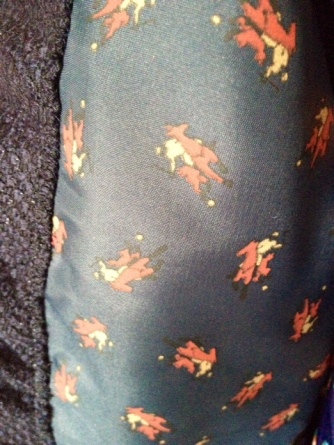 I came down to two options thanks to your suggestions, so decided to use my cheaper fabric (above left, a kind of self-check with a hint of sparkle, though hard to see in picture) for the easier pattern as a ‘warm up’ and intend to use my nice, pure wool for the slightly more advanced pattern on the right as a second attempt. And yes, I know they’re both navy blue, but just look at my lovely lining to jazz them up… 😉 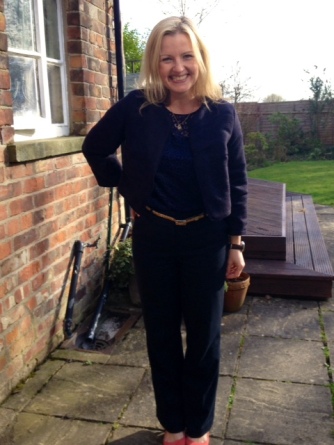 The jacket construction was actually a lot easier than I’d imagined which was a relief: really not a lot different to making sweatshirt or t-shirt tops (although maybe helped by the fact I’ve made so many of late). And sooo much easier than making trousers, which is where I’d placed it in terms of difficulty in my mind. But it turns out, wrongly! The pattern (free with Love Sewing magazine some time ago) was aimed at ‘adventurous beginners’ which seems a fair grading. The instructions were fairly minimal, but clear and with helpful line illustrations for further guidance. 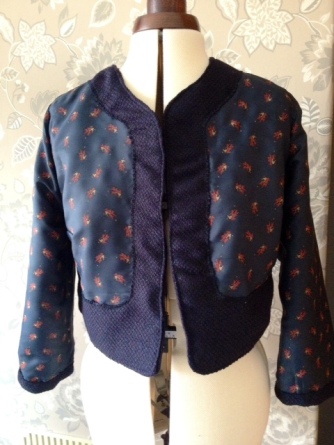 I chose to overlock all raw edges before switching to my regular machine because the fabric looked prone to fraying. There were no instructions for the lining, so I just went with instinct, which surprisingly worked well. The facings given for the unlined version made the insertion of the lining a lot neater and because of the simple shape it was pretty straight forward. It did involve a lot of hand sewing, which I’ve got better at, but I’m not fully sure how strong or durable it will be. I’m not usually all that careful with pulling on or off jackets and other layers at school, because of the frequency with which I need to do it due to vastly fluctuating temperatures around the buildings, but I think I’m going to have to be a little more careful with this. Luckily it’s come up a bit big so this should help, maybe a touch too big? Although I do only have one light-weight layer on here… 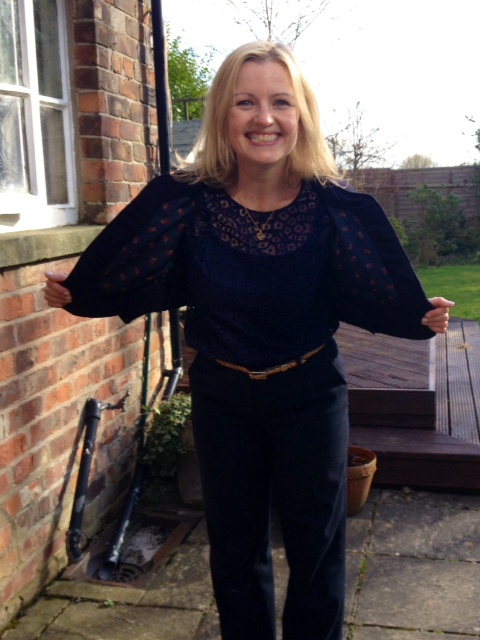 If I’m being fussy, there are a couple of creases where the lining isn’t quite lying perfectly, resulting in just a little pull at the bottom of the sleeves. But this is minimal and I doubt anyone would notice. And as a first attempt where I had to just make the lining bit up it’s fine. Overall, I’m so pleased with this and I’m looking forward to making the next one already. I would really recommend this pattern for building confidence in sewing jackets for the first time. The minimal design (there were pockets which I chose to omit here) is neat and practical: I think I’ll get a lot of wear out of this.

Soundtrack: mostly in silence, sometimes it really is golden 🙂

This month’s challenge over at The Monthly Stitch (just about sneaked it in) is ‘sew hot right now’. Yikes, a scary challenge indeed! But actually if I can sew jumpsuits (see here, eek) then I should be able to tackle this head-on. I couldn’t help but notice the abundance of shoulders in fashion magazines of late. Now this is something even those slightly (ahem…) older can manage. But lovely though those Bardot-style off-the-shoulder tops look, they’d be totally unpractical for the North West climate of late. My husband actually got snowed on on his way to work (Bolton way) yesterday!

But idly flicking through my sewing patterns the other day I came upon this Simple Sew pattern (free some time back with Love Sewing magazine). I’d already attempted the Cross-Over Back Blouse, see here, but the Jersey Top  I’d previously looked straight past. Blouson-style anything is generally a pretty unflattering look for me, but maybe it could work for active wear? Mmm… Worth a shot!

This was a doddle to make up and took practically no time at all. I chose to omit the neck band as I wanted to retain the off-the-shoulder look. I’m so pleasantly surprised with this and it’s almost perfect for wearing to yoga. The banded waist is perfect for doing inverted positions and preventing any unwanted tummy-show! 😉 I say ‘almost’ perfect though because I’m not fully confident of braving my bum in Lycra (though some leggings are more corset-like than others), so ideally this would need to be adjusted to make the length a good four or five inches longer. I’ve also used some fabric I had in (a beautifully,  soft jersey I bought on our Yorkshire Spolette trip to FabWorks) which would be great for a slower-paced yoga class, but I think I’d need a more sweat-wicking, technical fabric for a more demanding clas. But I’m being pretty picky here I know, it’s a great, first attempt at activewear to tick of my to-sew list this year 🙂 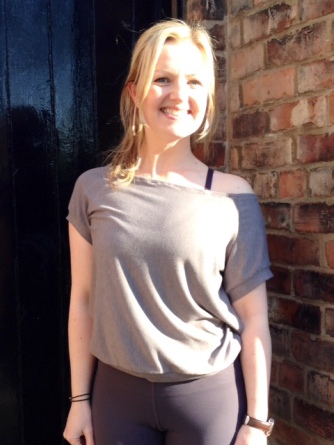 So shocking it bought out the vampire in me!