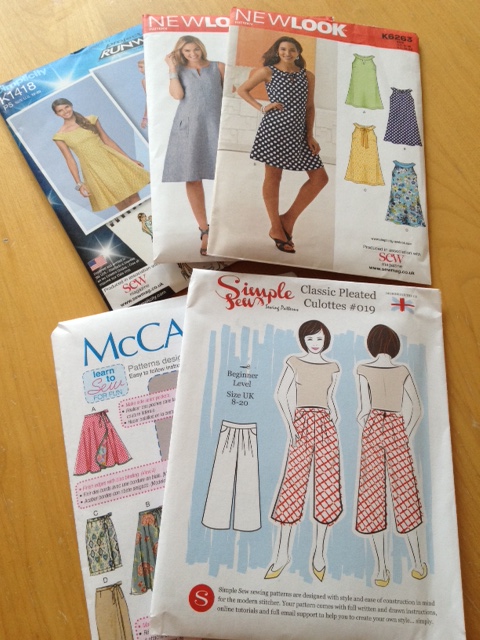 After a mini tidy-up of my sewing space at the weekend, it’s time for a destash… These are five patterns that are never going to make it to my cutting table so they’re up for grabs 🙂 First come, first served in the comments section below please. I’m happy to post anywhere free of charge as a thank you to all my regular readers, but only one pattern per reader please to share the sewing love even further. Please indicate clearly which pattern you’d like…

No 1: Simplicity K1418 Project Runway, UK sizes 4-20 and multiple dress options. I have lots of similar dress patterns and I don’t think the full skrt on this would work on my hips. That said there  are some very pretty back details on this…

No 3: New Look K6263 is another semi-fitted dress, but with an interesting neck detail. A little more shift-like than the previous one but still not enough structure for me.  UK 8-18, US 12-22

No 4: McCall’s M7129 Wraparound Skirt pattern is labelled as a beginners design. It has options for both straight and fuller skirts. I already have Tilly’s Miette pattern which is very similar. Sizes 8-16 I think American sizing.

And lastly, my favourite…

No 5: Simple Sew’s Classic Pleated Culottes. I so love these on everyone else but I need to part with it as it’s never going to work on me… It needs a better home so shout up! Beginner Level, UK 8-20

Hope there’s something that takes your fancy if you got here early enough. Happy sewing! 🙂 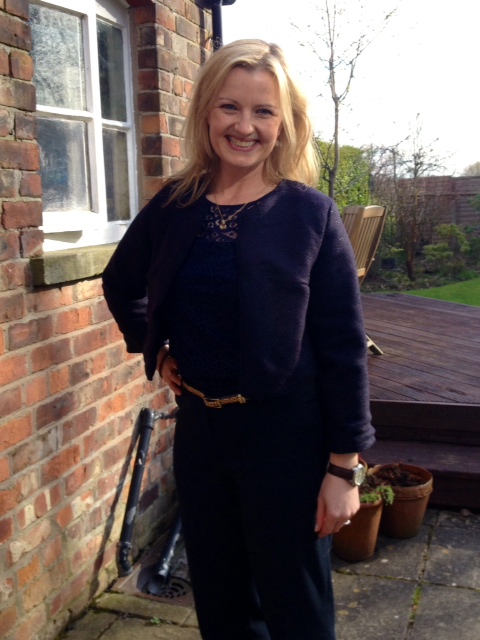 I finally made a jacket and can you tell how pleased I am with it? After much deliberation, (and thank you for all your suggestions), I finally plumped for the Simple Sew ‘Jackie O’ pattern. This wasn’t originally in my list, but I knew I had it somewhere (probably a sure sign that I need yet another clear up in my sewing space), and eventually unearthed it. 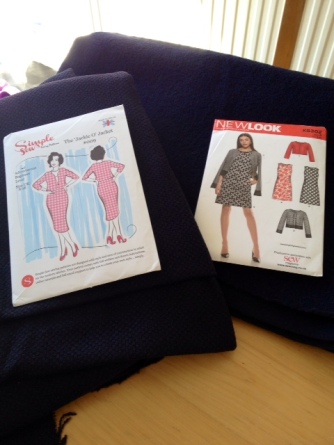 I came down to two options thanks to your suggestions, so decided to use my cheaper fabric (above left, a kind of self-check with a hint of sparkle, though hard to see in picture) for the easier pattern as a ‘warm up’ and intend to use my nice, pure wool for the slightly more advanced pattern on the right as a second attempt. And yes, I know they’re both navy blue, but just look at my lovely lining to jazz them up… 😉

The jacket construction was actually a lot easier than I’d imagined which was a relief: really not a lot different to making sweatshirt or t-shirt tops (although maybe helped by the fact I’ve made so many of late). And sooo much easier than making trousers, which is where I’d placed it in terms of difficulty in my mind. But it turns out, wrongly! The pattern (free with Love Sewing magazine some time ago) was aimed at ‘adventurous beginners’ which seems a fair grading. The instructions were fairly minimal, but clear and with helpful line illustrations for further guidance.

I chose to overlock all raw edges before switching to my regular machine because the fabric looked prone to fraying. There were no instructions for the lining, so I just went with instinct, which surprisingly worked well. The facings given for the unlined version made the insertion of the lining a lot neater and because of the simple shape it was pretty straight forward. It did involve a lot of hand sewing, which I’ve got better at, but I’m not fully sure how strong or durable it will be. I’m not usually all that careful with pulling on or off jackets and other layers at school, because of the frequency with which I need to do it due to vastly fluctuating temperatures around the buildings, but I think I’m going to have to be a little more careful with this. Luckily it’s come up a bit big so this should help, maybe a touch too big? Although I do only have one light-weight layer on here…

If I’m being fussy, there are a couple of creases where the lining isn’t quite lying perfectly, resulting in just a little pull at the bottom of the sleeves. But this is minimal and I doubt anyone would notice. And as a first attempt where I had to just make the lining bit up it’s fine. Overall, I’m so pleased with this and I’m looking forward to making the next one already. I would really recommend this pattern for building confidence in sewing jackets for the first time. The minimal design (there were pockets which I chose to omit here) is neat and practical: I think I’ll get a lot of wear out of this.

Soundtrack: mostly in silence, sometimes it really is golden 🙂

After a very relaxed, first week of the Easter holidays, we headed off for a week away at the historic and very picturesque town of Ludlow in Shropshire with my parents 😀

And where better to stay than in the castle itself? This was the view that greeted us on Monday. Fab! The kids had a great time running around exploring. On Tuesday we explored more of the town itself.  Above right is one of the many, many beautiful, old, Tudor buildings: The Feathers Inn. If you love history and haven’t visited before, I thoroughly recommend it as a destination.

On Wednesday we followed a couple of popular, walking trails around the town taking in yet more beautiful views. By Thursday we were ready to explore a little further afield and so headed to Blist’s Hill, a Victorian, model village (one of the many Ironbridge, tourist destinations). Above right was one of the lovely displays in the draper’s shop.

Friday took us shopping… amongst the fantastic array of independent shops (many of them food-related, Ludlow is a foodie’s heaven) was The Bindery Shop. I treated myself to a beautiful, new address book. Sadly it was time to head home at the end of the week, but we made the most of the journey home pausing at Ironbridge itself (above right).

And today, Sunday, I’m making the most of the last day of the holidays back home. This is the next project on my sewing table 🙂 Dreaming of warmer weather…

Hope everyone’s had a lovely break too (and possibly still going if you’re lucky, school holidays seem to be all over the place at the moment). I’m looking forward to catching up on the, no doubt many, posts I’ve missed while I’ve been away…

For more details on how to join in with #sundaysevens head over to Nat’s site Threads and Bobbins.