Anybody else ever find themselves with a couple of pieces of fabric that seem to just go on for ever? Try as I might I don’t seem to be able to get rid of these two knits: one in a bright red and one in a bright pink. I think I originally bought the bright pink for a Coco, but decided against it as soon as I got the fabric home, as it was much brighter than I’d anticipated. I did use it for contrast on my second Coco instead though, so got some use out of it. I also attempted to make a cowl-necked top out of it, but that ended up in the charity bag as it came out far too big. Nothing ventured… And yet I still have vast amounts of it left! The red, I got for my Monetta, but somehow I bought almost twice as much of it as I needed…

Last weekend when I was hunting around for a project I decided that it was time to use up these two long-term, lingerers. Or at least I tried, you can get what’s coming later can’t you? 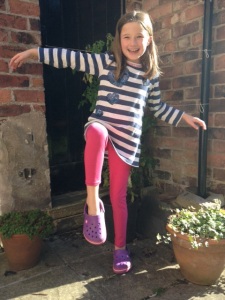 My daughter seemed the obvious recipient for these bright shades. Children always look so lovely in colour don’t they? 🙂 I’m also making the most of it before all she wants to wear is black for her teenage years… It was high time that I attempted some leggings for her too, so a plan was hatched. I used one of the Oliver + S patterns that I bought at Tatton Flower Show over the Summer. To be honest, they were so simple I could have just cut around an old pair, but I already had the pattern so it seemed daft not to make use of it.

They looked pretty underwhelming once I’d finished them, but my daughter loved them (bless her) and they fit her perfectly. She was really pleased with how comfortable they were. I cut a size 8, which was spot on with just enough wriggle room for all the fidgeting she does 🙂

But you can guess what’s coming next can’t you? Yep, I’ve barely made a dent in them both… The magic porridge pot keeps on giving! Why does this never happen for any of the expensive fabrics I buy?

While I was rooting through my fabric drawers I also spotted enough of this other knit for (yet another) infinity scarf, which I knew I could use as a Christmas present for someone or other. So this piece at least got fully used up! My daughter kindly offered to model it for me while she was trying her leggings out. On her it wraps around twice, but I think it will only work once on an adult. Hopefully it will still be useful over a plainer jumper to keep out the chills. 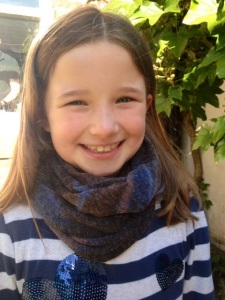 Hope everyone else has been making the most of the beautiful, Autumn sun this weekend. Until next time,

Last weekend I finally attended a curtain and blind making course at Ministry of Craft in the centre of Manchester, that I’ve wanted to go on for ages, but hadn’t quite managed to find the time for. I’ve read many an article proclaiming that curtain making is pretty straightforward, but I’m a visual learner and if I’m going to outlay a lot of money on nice fabric then I want to know that they’re going to both look nice and actually work!

Sure enough the tutor confirmed that the actual curtain (and blind) making was relatively easy, it was getting the measurements right that’s the head-scratching bit. After a fair few sums (which I think I just about followed, but clearly a second opinion would be worth getting once you’ve done your own), we progressed to making a mini curtain to take home for future reference. 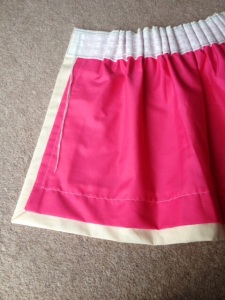 In short: we pressed the hems at the sides and then the bottoms of the linings, then ditto for the main fabric, next we learnt how to do mitred corners (at which point there were lots of audible sighs around the room 🙂 ). We then pinned the linings to the main fabric, attached the header tape and voila! It was all pretty straightforward, but it was the order that I found interesting: working from the bottom up rather than the other way round.

Next we attempted a mini, Roman blind, which was interestingly even easier. Well, the fabric part at any rate! I imagine cutting the header rail is actually pretty difficult… We followed a similar order as with the curtains, and again it was pretty fab when we threaded them up, and… Wait for it… They actually worked when you pulled the cords 🙂

As with the previous courses I’ve attended, it was fab to spend the day with a group of like- minded people. We’ve just finished re-decorating our whole house, so after we’ve tidied up the inevitable mess and moved all the furniture back I’m looking forward to getting started on a full version of these. Luckily, it’s my son’s bedroom that’s most in need, so any amateur mistakes are going to be hidden away in a room that most visitors won’t be inspecting too closely. Apparently IKEA is the place to head for both good value and quality, furnishing fabrics in modern colours…

Anyone else tried their hand at curtain or blind making? I’d be really interested to hear how you found making up the real things 🙂

This is the last piece of the lovely batch of fabrics I purchased a while back from Guthrie and Ghani’s online shop. It’s a beautiful, mid-weight, sweatshirt fabric featuring small, black dots on an off-white/grey background (though this time thankfully the right shade of off-white). I’d always planned for this to be a Coco top (Tilly and the Buttons) but I almost changed my mind to make another Astoria (Colette Seamworks) as I’ve been wearing my other two versions so much. But when I got it out I actually had more than I thought and plenty to make a dress version of the Coco, which I hadn’t tried before (one of the few advantages of being short and not needing much fabric).

I was a little nervous of whether this dress shape would suit me or not. I’ve seen some lovely versions online, but generally on bloggers with a more petite, skinnier frame than mine. I’m short, but go in and out a fair bit and generally need a little more structure around the middle. But I think it worked and it’s super comfy. It’s also pretty warm, so perfect for the much colder mornings we’re experiencing now. I love it from the front, but seeing these photos, I’m not completely convinced it’s that flattering from the back… However I have a snugly, waterfall-style cardigan that would go really well with it once it turns colder again, and that would also over up my bum 😉 And I never generally never see that side of me anyway, so really, no huge problem.

It was really easy to make up since my overlocker and I are now BFFs again! I vaguely followed the instructions, but I’ve made this a few times now, so it was all pretty straightforward. My only slight concern is the bottom ‘corners’ of the dress, which are a little ‘flappy’ in this lighter-weight, sweat shirting. I’m kicking myself that I didn’t try it on before I hemmed, as I could have easily taken them in a bit. But now it’s hemmed? I really can’t see myself bothering to unpick, it’s not that noticeable.

I’m gutted my stock of lovely fabrics has been depleted now, these were so much nicer to sew with and I know that I’m far more likely to wear them regularly. It also forces me to slow down and sew more carefully because I’m scared of wasting it. I’m now three weeks into my RTW fast without a hiccup (being busy helps), so I’m looking forward to treating myself to some more nicer fabrics as a reward 🙂