I was planning on calling this post ‘Trousers: third time lucky’, but it’s not, so I can’t! But I did get frustratingly close, which is something I guess. If you’re new to reading this blog, Simplicity 1699 was the pattern I chose for my first attempt at trousers (and hello!). I cut a size 10,  (which works well for both skirts and dresses on me) see here, but they ended up far too small. On my second revisiting of this make I carefully narrowed my darts and let the seam out along the crotch, which resulted in me just about managing to get them on, but with a serious danger of splitting them in public!

So last week, unwilling to add them to the charity pile as I’d used a really nice fabric, I cheated, or attempted to, and took them to a local, professional seamstress. She made me try them on and move around in them, but then said that I seemed perfectly capable of finishing them off myself and that I’d be annoyed if I let her! Humph, I begrudgingly acknowledged that she was probably right (but was secretly gutted she didn’t want to do it for me). Not sure if she just didn’t want to interfere with someone else’s sewing, which I do kind of understand. Anyway, she advised me to take out the front darts totally, replacing them with just a small tuck for each at the waist. She also said that if I took out the side seams just a little more, I’d be surprised at the difference it would make. She was right in a way. After revisiting them for the THIRD time, I can now get them on comfortably and feel less concerned about the danger of splitting them open in public, but as you can probably see from the photo above right, there’s still too much pull across the widest part of my hips for them to look ‘right’, darn!

There’s also a bit of weird puckering along the side seams, which is annoying. At this point, and after so much faffing around with these, quite frankly I’m sick of the sight of them! I still don’t want to chuck them, so for now they’re hanging forlornly on the back of our spare room door. I could hang on to them, in the somewhat optimistic hope of getting back to my ‘Summer-weight’, but having just had a sort out of my jeans drawer and ridding myself of several pairs of such ‘fantasy-weight’ (aka far too small) pairs, this seems pretty daft 😉

On the plus side, this was the perfect choice of trouser pattern for work. I’m really pleased with the slim body shape, but looser-shaped leg of these. I also have a replica copy of this pattern (free with a magazine), to cut the next size up with. And lastly, the pattern itself, before I started letting out seams and darts, was actually surprisingly easy. So, all in all, there are a fair few positives to this project, even if the end result turned out to be unwearable. Onwards and upwards…

This is my last one of the year, I promise! And in my defence at least it’s a little more Spring-like with its black and white stripes. And I have worn my other ones constantly. And it was a good exercise in pattern matching. And, and, and…..

Yes, I know, you get the picture! But they’re easy and super-comfy to wear if you haven’t already succumbed to a Colette Mabel. Not much to add other than, as with my last version, I left out the back vent. The fabric was ‘cheap as chips’ from Abakhans in Manchester. After sewing with some lovely fabric of late though, this did feel pretty ‘cheap’ in comparison. It came out ridiculously big in the waist because it stretched out so much, so I took it in by a good inch on each side with my overlocker. Simple enough to fix.

Enough already! Time to move on! Next time something a little more exciting, I promise 😉 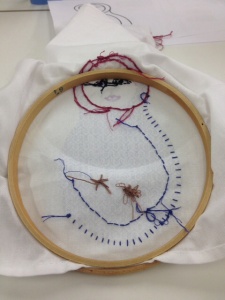 I’ve been so excited about attending this course, and it was every bit as good as I’d imagined 🙂 It was a beginners’ course in hand embroidery by TGBSB’s Deborah Simms at Manchester’s Ministry of Craft. And yes, she was just as lovely in real life!

We were given a linen tea towel and a template for a Russian doll to follow. Firstly we cut out and bondawebbed our chosen fabric to the tea towel and then Deborah guided us through a range of stitches: back stitch, chain stitch, blanket stitch French knots and daisy stitch. You can see my work-in-progress above left. I was pleased with my blanket stitch and chain stitch, but I pulled too tight on my daisy stitches, which resulted in them looking more like stars. She’s also looking a bit boss-eyed! The back of my work left a lot to be desired, but I was pleased with how quickly it all came together.

I went with a colleague from work this time, which will hopefully prove useful if either of us forget anything. It was a really relaxing way to spend an afternoon and if you’re a visual learner like me, the perfect way to learn a new skill:-) I suspect embroidery could prove yet another addictive hobby for me… Deborah assured us that it was a pretty cheap, but satisfying craft. I can already see it being a great way of using up pretty scraps of fabric and prettifying a whole range of projects.

I was really tempted to ask for a photograph with our lovely teacher, but was a bit worried of coming across as a scary, uber-fan, so just about managed to resist 🙂 We did get to ask her a whole host of questions about the series though, which was fun. It was lovely to hear that everyone was just as great in real life. All in in, it was the perfect Mothering Sunday treat. Thank you husband and children! I was treated to a tasty, Sunday roast, along with my own Mum (and Dad) when I got back home too.

I have a couple of friends who don’t find today the easiest of days for one reason or another. So I sincerely hope if you’re in a similar boat, you managed to survive it relatively unscathed x